In my last post I wrote about my collaboration with the French artist Florian Riviere. I found his work through Bernie DeKoven’s deepfun.com. I was immediately inspired and decided to visit him as my Study Visit for the Master of Arts I’m following.
Florian was invited to give a workshop called ‘Hack your city into a soccer field’. He was invited by a pop-up art gallery with a soccer theme, Offsites in Kreuzberg, Berlin. Apart from the title, nothing was clear of what the workshop would actually be about. I asked to meet Florian a few days before the workshop would start to share some ideas on the subject. We started the collaboration and ended up giving the workshop together. He liked my theoretical approach to the subject and proposed to share some of it with the participants during the workshop. I liked the reactions of the audience, people seemed to be following my, sometimes, theoretical approach. Even when we were on the streets doing interventions some of them brought up a piece of theory from my presentation that would support the action we were planning. This was great feedback that my story flies, and lands for that matter.

This was the Florian’s third workshop and his first workshop in a foreign language. I’d given one workshop for fellow students a year earlier called ‘workshop playing outside’, so we’re not exactly veterans in giving workshops. Nevertheless, we managed to inspire the participants, first by Florian’s work, then by my theory. Florian finished the presentation by showing pictures of locations in the surrounding area and a few simple ideas we’d come up with at those places. We then asked the participants if any ideas had popped up and if they found a certain location to be exceptionally inspiring. We had a nice conversation and people were filled with ideas, a participant went straight ahead to create a sort of golf court soccer goal, where the ball would be launched into the water. 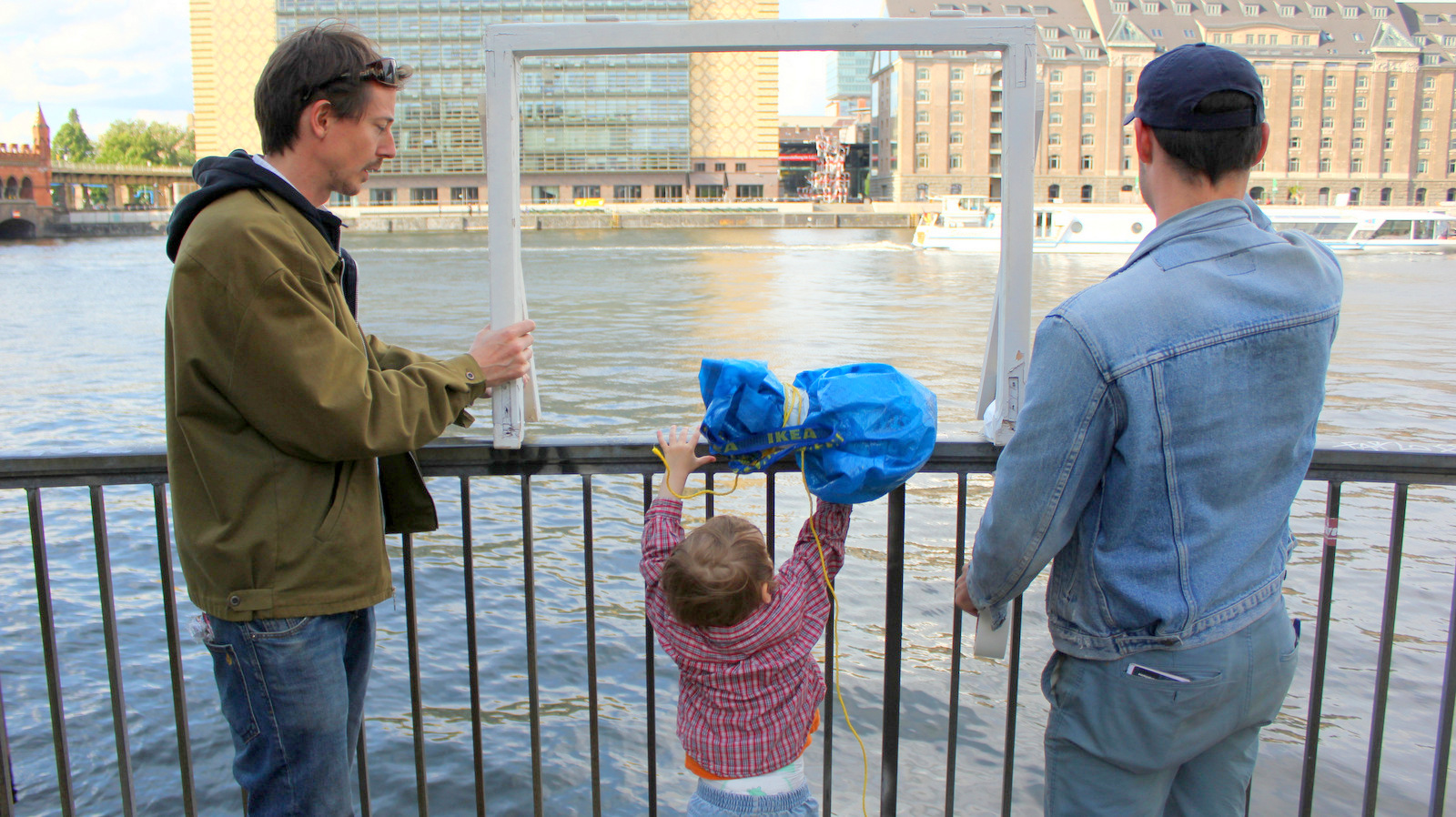 The idea participants were excited about from the get go was ‘crosswalk soccer’: We’d find crosswalk with allot of people and wait for the light to turn green. A refferee would then run onto the street, blow his whistle, and a pop-up soccer match would commence.

The idea was a success, all the participants were excited and we managed to raise a lot of smiles in our audiences. Eventhough the interventions didn’t actually involve the audience in the ludic activity, it was a great way for the participants to get a feel for the concept of ludic interventions in public space. And did they! A keen participants proposed to do the same intervention on a different stage. A european championship soccer match was playing and every corner in Berlin, being the street-life city that it is, had a big screen where people were watching the match. We’d do the same interventions, with stationary audiences. Again, it was a great succes. People were cheering at us and laughing out loud. I think this iteration of the idea worked even better to convey the underlying message of the workshop: play! anywhere, anytime. For the participants this became more and more apparent as they were creatively thinking about the subject.
When you, as a maker, live by this design philosophy it will resonate in your work and it will travel into your audiences, hopefully turning them into ambiguous participants. 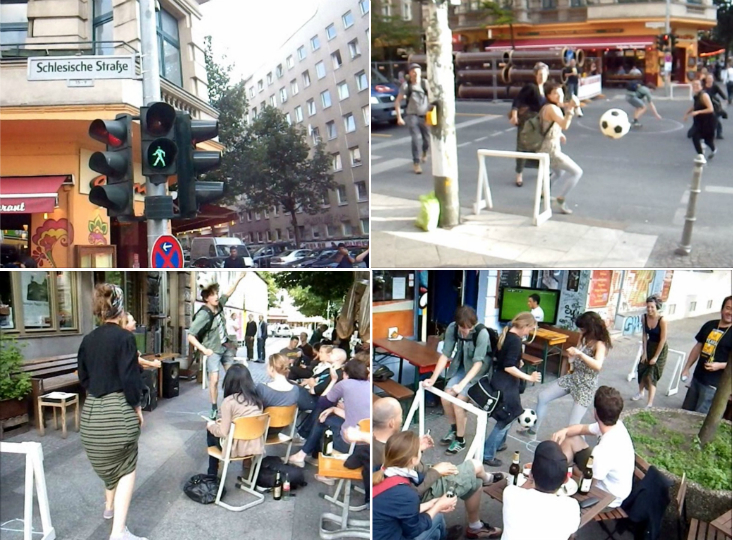 The second day of the workshop was with a smaller group. This allowed us to form a more flexible team with which we did the ‘Graffiti Soccer Crew’ interventions. Check my previous post for more information about this project. Basically we created ‘the worlds largest soccer field’ by spray painting pieces of soccer field on differenct locations on the map. 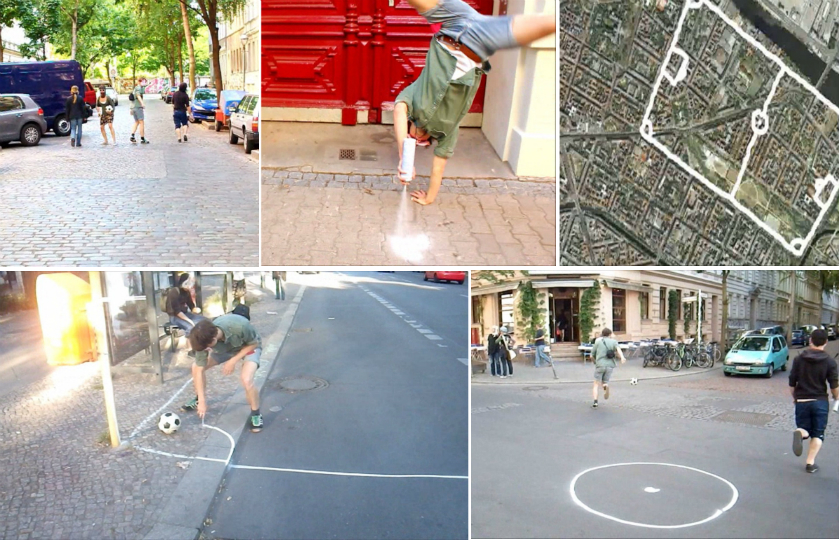 This project aims to convey the message of ‘Play! anytime, anywhere’ on a global scale. By documenting the interventions on a Google Map, and sharing this with the public the message conceptually reaches further to a larger public. You can check out the map here:


This leads me to reflect; both projects described here have more in common with flashmobs than with, what I like to call, ludic interventions. In my research I’m looking for ways to evoke playfulness, to invite audiences to become playing participants. I believe both of these projects do this, but more on a conceptual level. Audiences see the intervention and could reflect on their own behavioral patterns and maybe even change them to match the intervention, but this is a long procedure! I’m convinced of the ‘power of play’, it’s use for directly influencing someone’s behavior and experience. In a next experiment I want to incorporate a more point-blank approach to evoke playful behaviour in public space by ludic intervention.
Category: Experiment, Projects, Research, Thoughts Tags: flashmobs, intervention, ludic, ludic intervention, performance, playfulness, public space, urban, urban games, urban hacking